Catherine Grant is a film scholar and video maker, and also works as a guest speaker, research consultant and external examiner. As a researcher and critic, she mostly makes and reflects on audiovisual essays about screen media studies. Grant is former Professor of Digital Media and Screen Studies at Birkbeck, University of London, and also lectured and researched for several decades at the Universities of Kent, Sussex, and Strathclyde. She is founding author of the Open Access website Film Studies For Free (and its social media accounts) as well as several other scholarly research platforms. In 2020, she was elected member of Academia Europaea’s Film, Media and Visual Studies section in recognition of her research, and she also holds a number of international fellowships and artistic residencies in her field. In June 2021, Grant was awarded the title of Senior Visiting Research Fellow in the School of Arts and Communication Design, University of Reading (until 2024). 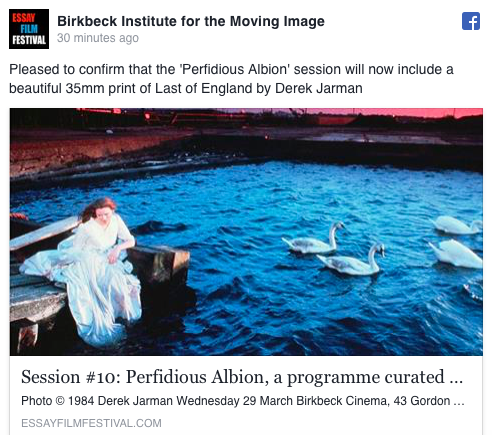 What does it say about British identity that from as early as the 13th century foreign states have shared a single Anglophone slur to describe British double-dealings overseas? Perfidious Albion: the name for Britain when its government operates dishonourably, is treacherous, or betrays a promise.

The promise of British identity has been much discussed in the last twelve months. Two versions are in competition. Britain in the world, outward looking and open. Britain as an island nation, insular, self-interested, maybe closed. In the aftermath of the Brexit vote, as Britain floats off the coast of mainland Europe and dreams its future, this programme looks at how essay filmmakers have analysed the promise represented by modern Britain and estimated to what degree the country lives up to its perfidious reputation. Curated by Catherine Grant and Sarah Wood, it features two recent works by Wood, alongside works by Derek Jarman, Humphrey Jennings, Margaret Tait, Isaac Julien and the Sankofa Film and Video Collective, and Cordelia Swann.